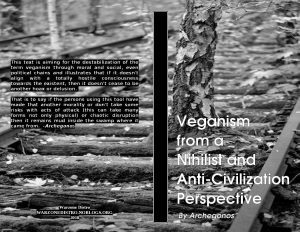 This text is aiming for the destabilization of the
term veganism through moral and social, even
political chains and illustrates that if it doesn’t
align with a totally hostile consciousness
towards the existent, then it doesn’t cease to be
another hoax or delusion.

That is to say if the persons using this tool have
made that another morality or don’t take some
risks with acts of attack (this can take many
forms not only physical) or chaotic disruption
then it remains mud inside the swamp where it
came from. -Archegonos

What is veganism? Another morality? Another alternative of society? Another
swampy lake inside the infinite sea of the abomination of the existent? Most of
its aspects are moralistic and anthropocentric. From this part not even the
anarchists can escape. Veganism as a passive form of “struggle” neglects to
consider many things from my point of view. Now someone could tell me it is
exactly the same since you are a vegan. But no. My start is completely different.
Instead of a form of struggle I would specify that as a form of abstinence from
one of the wheels of civilization and capitalism with the admittance of its
problematics in the present reality. Because as a struggle, from whom and
towards whom would that be? A struggle of the civilized human towards yet
another subject of exploitation could be nothing more than as sterile as many
others. A victimization. On the other hand as an individualist choice of
conscious abstinence and negation of the part of the existent that sees our
comrades as raw material it becomes a dynamic choice. There is no “good” or
“evil” for me. Inside the system of capitalism I deny the decadence which
emanates from prisons and the tyranny of the life of the non-human animals. In
another non-systematized world I would not deny, if the circumstances of
survival demanded that, to use anything from whichever living organism. If I
needed that and I was stronger I would prevail. With respect for the lives of my
non-enemies. So a form of abstinence and anti-necrosis of my ego from the
imprisonment, commercialization and trivialization of non–human life from the
endless and infinite notion of civilization. Not as “embargo” to the industry of
meat which would have no meaning for me because afterwards you will find
yourself nonetheless entangled in the wheels of another industry. These have no
meaning for me anyways since the economics are a part of this system and have
nothing to offer me. I want to destroy economy not to use it politically. Not as a
choice of “good” or “bad” since I do not acknowledge any form of moral
normality that comes from social or cultural structures, nor do I care about
morality at all. So it is just a tool one can use given the current circumstances
and nothing more. It is the closest approach for my individuality that has
negated anthropocentrism.

Anyway you cannot be 100% vegan or keep an attitude towards the earth that
you might have wanted through a system that everything is assimilable and we
have seen that many times. Being an anarchist you realize quickly that
everything inside the system of the state and civilization is your enemy. You
find yourself in a constant war. All of the basic need products inside the system
will either be made out of non-human animals that have died for the needs of
consumerism and the various companies which enslave our lives, or will be
toxic or non-degradable by the earthly environment, or will be the products of
the vegan or environmentalist companies which there is being played another
game of profit and consumerism approaching the moral or lifestyle consumers
and creating other societies, assimilable, and of course controllable by the
system. Even if you choose tactics, let’s say as an example to expropriate shoes,
you could avoid to contribute to the economic part of the system of consumerism but you will never be certain of whether or not you have avoided
the fact that the shoes you stole could most likely have on them materials that
are toxic or non-degradable (and would have been made in a way that pollutes
the earthly environment), or even to have glue on them that uses extracted
products from prisoner non-human animals. The systems of exploitation and
destruction of the civilized man towards everything we love is endless. So as a
nihilist and with conscience for total liberation anarchist individual, I don’t see
veganism and my awareness about the earth through any moral chains which
would be easily assimilable by the system (the system includes laws, institutions,
morals, state, society, civilization etc.) and I consider it ridiculous even for
myself to play the game of politics, of looking to find the vegan products or
those friendly to the environment inside the system of ultimate exploitation and
trivialization of anything free and alive that exists. Therefore I am a vegan out of
personal conscience, given the current circumstances, without becoming a monk,
trying in any way and as much as I can to abstain from the dominant
anthropocentric decadence of life in this world. The anti-civilization conscience
is just another part of the esoteric of the individuality that acknowledges no other entity above the individual and his/her/their desires, analyzing the earth as a chaotic integral part of existence and reappraises his/her/their relation to it and all the other individualities.

Only through spontaneity, the negation of what we have been taught including
all values and ideals coming from society, oneself’s uniqueness and critical
thinking, moments of attack and self-fulfillment and I could also say the coming
closer to the earthly environment, I could see a meaning of existence (personal
meaning, not as an objective truth) of my individuality.

Veganism is clearly only a tool against some systems. For the other forms of
liberation of each individuality each one of us can invent his/her/their own ways.
There is no singular effective way/means. We set targets, we are patient, we use
every material and means against the enemy and with whatever power we have
been left with and whenever we can we attack like the eagle without any moral
barriers nor respect for their lives. Not for a “greater purpose”, but for the time
that has been stolen from us. Away from moralistic claims like “meat is murder”
I feel the need to attack everything that attacks my aesthetic perception and
doesn’t leave me to get pleasure from my surroundings. I don’t have the need to
criticize the comrade who does not follow the methods of veganism for
his/her/their own reasons, but has developed a deep analysis against the existent, (although meat eating and the use of non-human animals is the most dominant form of living on the planet), insomuch as this comrade will have reached a state of consciousness through critical thinking which will not leave him/her/their to fall into complacency with his/her/their choices or consider one way of living inferior or superior, normal or abnormal. I will criticize though for sure all those who do not question the mass habits of living as well as all the anarchists whose criticism of veganism originates only from the idol of the anthropocentric world.

Veganism From A Nihilist and Anti-Civ Perspective pdf 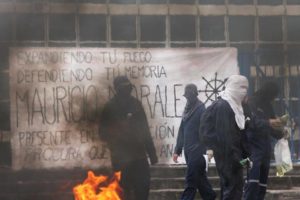 ANARCHIC PRACTICES IN THE TERRITORY DOMINATED BY THE CHILEAN STATE

This article was originally intended for a new issue of Fire to the Prisons magazine. It brought together a group of comrades in Chile for a collective opportunity in revolutionary introspection. Unfortunately due to logistical complications Fire to the Prisons #13 will not be happening any time soon. But in light of the efforts of comrades both writing this piece, as well as others translating it to English, we found it important to publish the piece and share it with the English speaking anarchist world. The article helps to provide an understanding of the Chilean anarchist movement today and its’ origins. This pamphlet also includes a list of imprisoned fighters and comrades in Chile that those who wrote this, as well the Fire to the Prisons collective would like to express our solidarity with.

For an opportunity to read prior issues of our publication in PDF form, feel free to check out

For relevant and up to date information, please visit:

In permanent conflict and revolutionary solidarity
Fire to the Prisons!