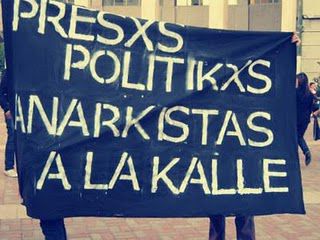 Note from Insurrection News: The following text by imprisoned compañeros Fabián Durán, Enrique Guzmán,  Nicolás Rojas and Joaquín García was written in response to the cowardly attacks by prison guards against the imprisoned compañeras Tamara Sol, Tato and Claudia that took place at the San Joaquin women’s prison on January 11th and 12th. In response to these brutal and cowardly attacks friends and relatives of the compañeras quickly mobilized and held a demonstration outside the prison on January 13th. Banners were displayed outside the prison, slogans were shouted and also painted on the prison walls. Riot police eventually attacked the demonstration with water cannons and arrested 5 compas. Although the demonstration was suppressed it sent a clear message to the prison authorities that attacks against imprisoned revolutionary compas will be immediately responded to. You can see some photos from the demonstration here.

From the modules of the maximum security section we salute each of the compas kidnapped by the state, who day by day, with dignity and pride, face the prison reality in each of its expressions and forms.

A few days ago we learned in a more or less partial form of the cowardly attack by the prison guards against the compañeras Tamara Sol, Tato and Claudia. We are fully aware of how repetitive these actions have become, whether as punishment, isolation or an eternal package but the recurrence prevents normalization, this gives us more strength, to ourselves and to our convictions. Each day we become more acutely eager for revenge against the prison society and those who defend it.

We know the personal motivations of many prison guards and the truth is they do not worry us, because we know how they feel about subversive prisoners and we know that each cowardly attack is due to their frustrated attempts at defeating us, therefore they are nothing but reasons for us to feel proud.

We greet each of the compañerxs and relatives who with their solidarity and unyielding attitudes held a rally outside the prison in support of the compas.

We end these words sending much love and strength to the compañeras.

We are attentive to their decisions and we will not hesitate to join them in whatever actions they deem necessary. 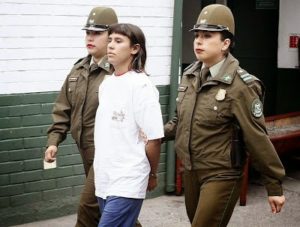 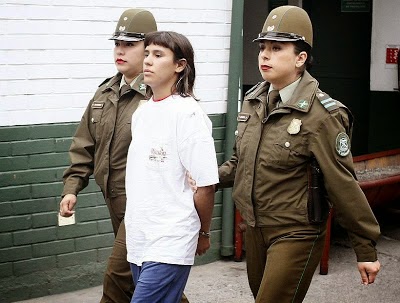 For my part i did not meet Angry, but his death ( that was not indifferent for me) bring him next to me through his texts , drawings , songs or memories of other people who make him alive with great affection, and allowed me and allows me go farther that day December 11 for taking a more deep sense of memory of a comrade and also of others. A sense of recognition of the person itself, of a being who did the step to challenge himself, and this society and civilization of domination through the attempt of living another life that was not the established and pre-fabricated one. With the good and bad moments, contradictions and hits that entail the choices and refractory wills.
The memory i am talking about begin from a feeling of affinity with the comrade and certain experiences, practices , desires , feelings and ideas that fill our lives of a own sense , pride and the impulse to walk by a similar path of struggle and confrontation, of wishes and creation.
It is so the political and personal elements ( even from the last ones i cant explain myself very well) of his daily life and personality take importance. As his way of feed himself, his negation to consume certain products and substances, his love for the earth, having in consideration other lives that are not the human, his contempt for the wage labor, his ilegalism , and that energy and that spark that he had , also takes on strength and makes his action of expropiation and his attitude valuable. For this reasons , i regret that someone like this is no longer between us. Because besides of being propelled by direct actions, expropiations and ilegalism , he was someone who try to take and make his own life in rebellion.
For all this i will never forget who was and what kind of citizen ( a security guard) is the damned one who kill Angry

Freedom to the comrade Tamara Sol who did a step in the revenge.

A hug from this jails to each affine.

(Translated by Traces of Fire)

To the comrades, those in affinity, to those present. We were surprised to learn of this initiative, and we consider it very highly knowing that it is an initiative that comes from people whom we do not know or with whom we have no ties, who as individuals and as a group feel the desire to come together in an act of solidarity and affinities, which we greet with the affection and strength that we receive and which gives us the energy to face the prison context as we would like to.

Three weeks have passed since we found ourselves in the maximum-security section of the prison where, unlike the rest of the prison population (the other pavilions), we cannot get out of the section unless handcuffed and with a guard at our side to control us. Likewise we are prevented from participating in learning or recreational activities apart from going out a couple of days to play women’s football at the field.

This highlights the fear that institutions have for libertarians, anarchists and people who collide with the system and civilization. This in the women’s prison at least.

But in this context we are trying to break the isolation and control also of our ideas through learning spaces such as a kitchen garden that we have built from recycled materials, and at the moment we are waiting for the tailoring and screen printing project here in the section, in addition to other things that we have in mind.

We want you to know that we are happy to be together and to be working to nourish our ideas and also strengthen more bonds and practices such as forms of confrontation with the established order. And on this point we are preoccupied about the arrests of comrades that have increased following the new law on weapons and explosives control involving prohibitive convictions and no benefits from 3 to 5 years for those with a weapon or a Molotov, as well as for those who activate incendiary devices or explosives.

Faced with this new panorama, and weighing up the costs in terms of a greater number of arrested comrades, we think that at the time of passing to the attack through an action, it is important to consider the aim, the potency and effectiveness thereof and at the same time broaden the objectives and see the weak points of the patriarchal, techno-industrial capitalist machine, physically as well as morally and in ideas.

We recall as points of reference actions such as attacks, expropriations for which now sees a comrade in captivity in Spain; the wave of churches burned in the South; the technological and scientific centers destroyed; the car bomb at Microsoft; Rote Zora’s actions against patriarchy; the CCF, the Mapuche and the affinity groups that organize and conspire in anonymity…

From these cells, we send you our love, receiving the strength and solidarity that you have generated.