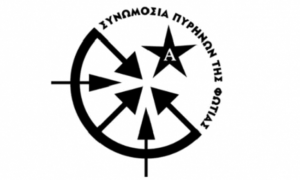 We claim responsibility for attacking the house of the district attorney Georgia Tsatani, in Ippokratous street in Athens city center, next to the Exarhia police department.

We knew that G. Tsatani has a police escort and that she is a guarded target, but this didn’t stand in our way to accomplish our attack. We chose a symbolic action with only material damage as a sole purpose, but the Conspiracy of Cells of Fire won’t be limited to that…

We have two reasons for choosing this particular district attorney.

The first one is that G. Tsatani is a member of the para-judicial network whose job is to take out of sight case files that impinge the interests of the business and politics mafia (with a view to profit of course). She is the judicial vanguard of her masters.

The apex of her tainted career is the Vgenopoulos case, where G. Tsatani closed the case, aiding him to be discharged of his certain conviction. Her venality by the businessman Vgenopoulos pumped up more her invisible para-judicial account. These inconspicuous courtesies of businessmen can built the villas of the judges as an exchange for their “justice”.

Another sample of this district attorney’s writing, that is being kept diligently secret from the media, is Meimarakis’ case. Georgia Tsatani is the one who took on the case file regarding the equipment and the bribes of Vagelis Meimarakis, the former minister of national defense back then and she made sure to “forget” to send these files in the parliament, with her sole purpose being to cover for him. The exchange of this conciliation was the placement of Tsatanis’ daughter and husband as minister candidates in New Democracy on Meimarakis’ presidency.

Georgia Tsatani had involvement in the Vatopedi case, making clear once again the mafia-like partnership between Church and Justice, as well as in many other famous cases that she would “chop off” in order to conceal and protect the interests of authority.

The second reason for choosing to attack the district attorney Georgia Tsatani was her participation in the judicial thralldom of our comrades’ relatives.

G. Tsatani was the one who viewed as unacceptable one of applications of release by Evi Statiri, who is the wife of Gerasimos Tsakalos, member of the C.C.F. Thus, she contributed in the anti-guerrilla campaign and in one of the most immoral extortions against anarchist revolutionaries.

The vengeful obsession of the judges against the families of our comrades is a choice that all judges involved will be asked to pay and at a great cost. We have remembrance and most of all patience, persistence and diligence…

We are dedicating this action to the imprisoned members of C.C.F Gerasimos Tsakalos, Christos Tsakalos, Giorgos Polydoros and Olga Economidou.

We are sending our solidarity to the anarchist comrade Aggeliki Spyropoulou, to all unshakeable political prisoners that lie in the cells of the Greek Democracy, as well as to the Italian comrades Alfredo Cospito, Nicola Gai and the anarchists persecuted in Italy within the undertaking “scripta manent” against F.A.I.

Soon the complete version of this proclamation will follow, as well as our initiative for “Nemesis” Project.

We will be back…

No comments yet
A-politiko athens Conspiracy Cells of Fire Greece