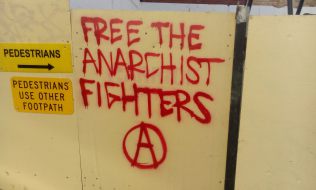 We learn from the correspondence with anarchist comrades in the AS2 [high security] of Ferrara prison,
that with the renewal of censorship [March 6th] for another three months, the grip on their correspondence
started again, and many letters are seized.

In addition, they tell us that comrade Nicola Gai could be in isolation. We are waiting to get all the facts,
as soon as the prison visits will be done. 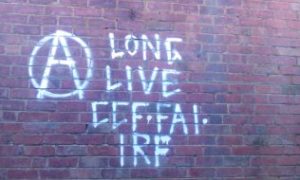 Mobilizing our anti-authoritarian strength in concrete actions of hostility towards the power, we attacked the Evangelical Church of the Carabineros of Chile (located in the center of Santiago) with a noise bomb. We chose the night of September 19 for our action, the day in Chile when the State and the citizen masses celebrate the ‘Fiestas Patrias’ and render honor to the Armed Forces and the police.

Our action is a sign of repudiation against the festive atmosphere of nationalism and alienation promoted by the State and voluntarily accepted by the social majority functional to power.

We send our solidarity to comrade Juan Flores and the comrade Nataly Casanova, two years since their arrest accused of installing explosive devices. We also greet the comrades Juan Aliste, Marcel Villarroel, Freddy Fuentevilla and Natalia Collado. May our solidarity be transformed into fire and explosions for the comrades Monica Caballero and Francisco Solar, the imprisoned comrades of the Conspiracy of Cells of Fire and Angeliki Spyropoulou in Greece, the comrades Nicola Gai, Alfredo Cospito and the comrades recently arrested in Italy for the attacks of the Informal Anarchist Federation (FAI).

Against the Church, the nation, repression and all forms of control over our lives.
Our deafening noise is a cry for freedom. 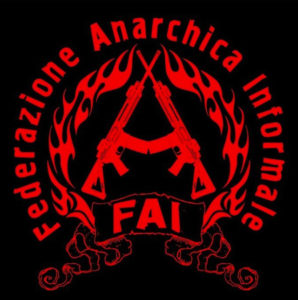 On September 6th 2016, Torino’s section of the DIGOS antiterrorist unit unleashed an anti-anarchist operation under the name “Scripta Manent”. House searches were conducted in various regions of Italy. Anarchists Alfredo Cospito and Nicola Gai, incarcerated since September 2012 for kneecapping Adinolfi (Olga Cell FAI/FRI), received a new arrest notification in prison. Additionally, six arrests were made on the outside (five in the context of this operation; one as outcome of a house search).

Operation Scripta Manent seeks to attribute to the accused a series of actions claimed by FAI (Informal Anarchist Federation) in Italy. Therefore, the comrades Marco, Sandrone, Anna, Danilo and Valentina, alongside Alfredo and Nicola, are likely to face charges of “subversive association with terrorist intent”.

Below are their mailing addresses (that may change at any time):

Nicola and Alfredo are held in the AS2 wing of Ferrara prison:

Daniele, an editor of Croce Nera Anarchica, was captured that same day in the context of another arrest proceeding, after police found some batteries and an electrician’s manual in his apartment. He is likely to face charges of “possession of materials for the manufacture of explosive devices”.

The comrade can be contacted at: