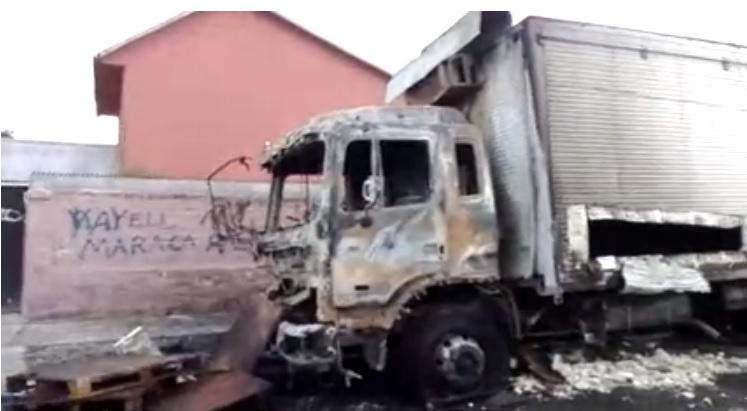 Black December means action and memory, and, like any initiative of direct attack, it comes to life and continues when there is a will to go from words to deed – to break with the normality of the capitalist social routine and the comfort of civic life.

Always prepared for action, we liberate ourselves from the consumerist fever and the behavioral patterns imposed by the social order with its end of year traditions. And so, with planning, cunning and certain precautions, the anarchist attack never stops.

That’s why at dawn on December 28th we set fire to a truck in the city of Santiago, in a suburb of the so-called ‘middle class’. The action was reported by the media and now we can confirm: it wasn’t a short circuit, it was an intentional fire wrought by anarchic hands during the middle of the night in the streets of their disgusting city.

Setting fire to a truck is attacking the mega-machines and structures that contribute to the devastation of the Earth, it is setting fire to the ideas of progress and civilization, it is our contribution to the ongoing agitation against the IIRSA-COSIPLAN project and the construction of thousands of kilometers of roads that destroy eco-systems to facilitate the transit of trucks full of merchandise and accelerate the advance of the city that contaminates our life.

By burning a truck we also sent smoke signals of sabotage in solidarity with the Mapuche rebellion and their struggle for autonomy and territory. Because the blood of Camilo Catrillanca ignites the insurrection against our common enemy which is the State and capital.

We claim this action as part of the Informal Anarchist Federation, a tool for international communication between anti-authoritarians via direct attack, greeting with fire each cell and individual that seeks destructive action against civilization and technology, its structures and the people directly responsible for oppression.

With our action we embrace the comrades Juan Aliste, Marcelo Villaroel, Joaquin García and Sol Vergara; Facundo Jones Huala, the machi Celestino Cordova and all the peñis and lamgen who resist in the prisons and communities, to the comrades in Argentina who remain dignified inside and outside the prison following the recent repressive operation in November; Alfredo Cospito, Nicola Gai and all the comrades in prison and facing trials in Italy, to comrade Lisa in Spain; to Dinos Yagtzoglou, the comrades of the Conspiracy of Cells of Fire, Angeliki Spyropoulous, and all the imprisoned comrades in Greece and to all those in the USA, France, Brazil, Indonesia, Germany, Spain, Russia and the entire world who continue to fight against all forms of domination.

FROM CHILE TO GREECE, WITH SEBASTIÁN OVERSLUIJ AND ALEXIS GRIGOROPOULOUS IN OUR MEMORIES
FOR THE MULTIPLICATION OF ATTACKS AGAINST POWER
FOR TOTAL LIBERATION

(Translated into English for Mpalothia by Anarchists Worldwide)