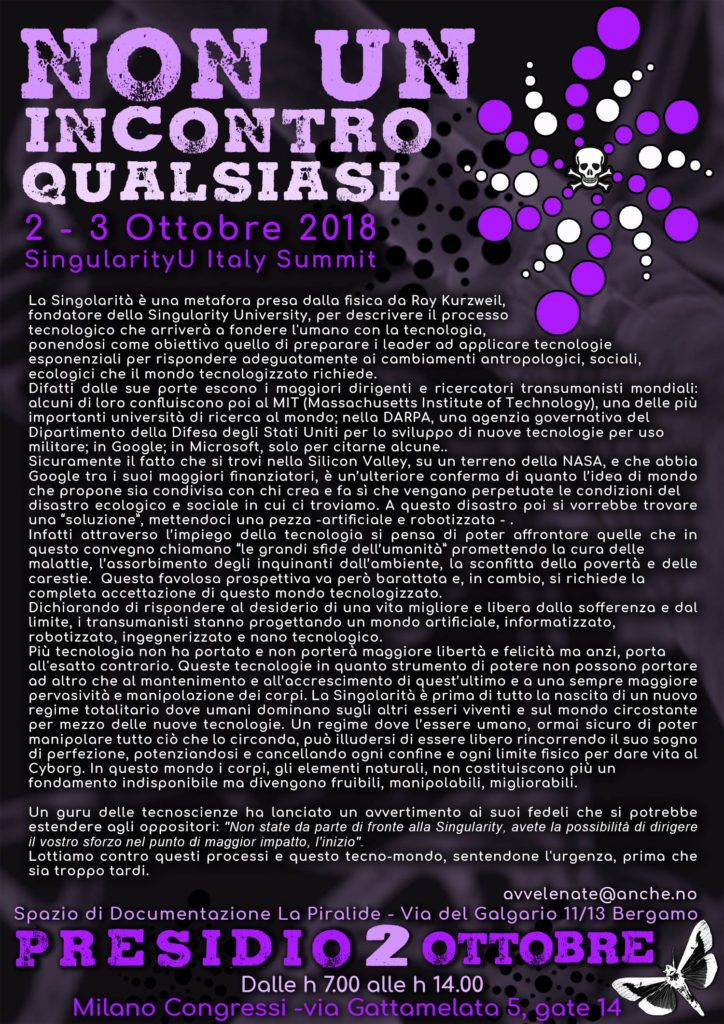 This aim clearly succeeds in preparing the best transhumanist researchers and directors of the world since some of them merge with the MIT (Massachusetts Institute of Technology), one of the most important research universities of the world; with the DARPA, a governmental institution of the United States Department of Defense for the development of new technologies for military use; With Google, Microsoft and others…

The fact that the Singularity University locates in the Silicon Valley, in a plot of land owned by the NASA and the fact that Google is one of its best sponsors, is a further demonstration that its idea of the world is shared with who creates and maintains the conditions of the social ecological disaster we are facing. Then, they would like to find a solution to this disaster by putting a patch on it.

Oh, don’t worry! It seems like they have found the famous patch, it is an artificial and robotic patch. In fact, by using the technology they think they can face the so-called “great challenges of humanity”: the possibility of a happy future is guaranteed.

A future that, replying to the fear of the death and the desire of immortality, promises a therapy of diseases, the absorption of environmental pollutants, the defeat of poverty and famine. But you have to barter this fantastic eventuality for the complete reception of this technological world.

By replying to the desire of a better life with no sufferings and limits, transhumanists are planning a world which is artificial, digitized, engineered and nanotechnological.

But you mustn’t fall into this trap: more technology didn’t bring and won’t bring more happiness and freedom, it brings actually the exact opposite. These technologies are instruments for power and they can’t bring anything but the maintenance and the spread of the power itself and also the manipulation of bodies. The singularity is not just the creation of super smart machines: first of all, it is the birth of a new totalitarian regime where human beings control other human beings and the world by using new technologies. A regime where the human being, sure of his skill to manipulate everything around to his taste, can give himself the false hope of being free and chasing his dream of perfection by boosting himself and eliminating any borders and any physical limits to create the Cyborg.

In a world like this the bodies and the natural elements don’t represent an unavailable foundation anymore; they become usable, manipulating, improving. The singularity these scientists want to transmit to us doesn’t correspond with the uniqueness and the singularity of the individual, but with the uniformity and the homogenization due to the technological development.

A technosciences guru once gave his followers a warning that could extend also to his opponents: “Don’t stand aside to the Singularity, you have the chance to lead your efforts to the point of greatest collision, the beginning”.

The fight against these processes and this techno-world, feeling the need of it, before it is too late.

No comments yet
italy Singularity