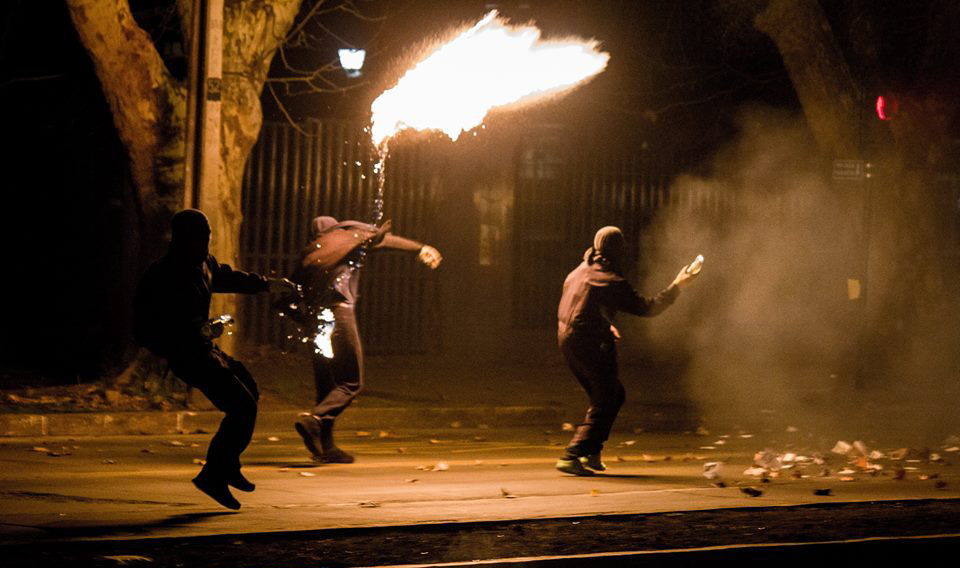 On Tuesday , December 6 of 2016 , 8 years after the murder of the antiauthoritarian Alexandros Grigoropoulos by the cops, anarchists , antiauthoritarians , neighbors and people who hang around Exarcheia decided to break the normality of the miserable life imposed by the social standards and resist the state repression. Every year, that day the neighborhood of Exarcheia is surrounded by cops trying to stop the vengeful rage of those who take the streets fighting.

But this time, the resistance of the rioters was more organized and coordinated than ever, following the response against the state in the clashes of November 15 and 17. The anti-state offensive was fierce, and that was proved because – despite the murderous firing of rubber bullets and tear gas directly into the bodies – The uniformed fascists only managed to pass the burning barricades late at night, and after most of the people , especially the organized ones had already left the place.

This victory of ours hurt the servants of the state, who projected all their psycological complexes beating the arrested people of that night. Their cowardly violence and the attempt of the greek bullies to humilliate the arrested comrades is the proof of their bitter defeat.
Also the filthy judges plays their part on the repression of the insurgents when acting in the name of all the state authorities send three of the arrested on pre-trial imprisonement.
The surrounding of Exarcheia was already intensified before 6 December, with the characteristic example of the invasion of motorcicle police forces and the control of migrants. It was like that until the 6/12, particularly with the presence of special forces of OPKE in the area.

We answer the murderes of minors with the same thing that they learn to taste all this years: fire.
In the evening of Friday , December 16, we choose to attack the bullies of the greek police located at the intersection of Kallidromiou street and Oikonomou street, supposedly to protect the supermarket besides. For those who knows the area of Exarcheia, is obvious that the deployment of OPKE units in that place serves other purposes and is framed in a broader plan that seeks to control the neigborhood.

The tasks of this unit (OPKE) in the past years at the city outskirts and specially in the west zone of Athens had as only objective the military-style ID control to youngsters , outcast and migrants. The ridiculous reasons that they use to impose their reign of terror in Exarcheia will be answered with gasoline and fire over their heads. The armed cops of OPKE showed their huge skills when they began to run away in panic and hide behind a car in sight of the 15 molotovs flying against them.

The clashes and the diffusion of insurrectionary situations must be a daily practice. That December 6 light up the metropolis every night, until freedom and anarchy.

FIRE AND EXPLOSIONS AT THE MINDS OF THE COPS
FREEDOM TO THE 3 ARRESTED OF 6/12 WHO ARE ON PRE-TRIAL IMPRISONEMENT.

Anarchists ( the ones who attacked there, in that way)

(Translated by Traces of Fire)

One Reply to “﻿Athens: Attack agains OPKE unit in Exacheia”