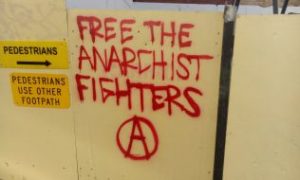 The anarchist comrade Alessandro Mercogliano informed us by letter that upon his arrival in Ferrara prison, November 19th, he refused to gave his fingerprints and to took pictures of him. A few days later the prison authorities reported him with a penalty of 15 days to be served in solitary confinement.