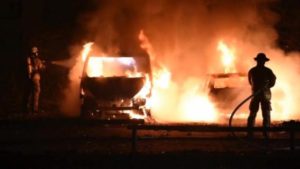 It is getting warmer, concerning the preparations for a hot July against the G20-Summit. In the night from 11th to 12th November property of the Thales Company was destroyed.

Thales is one of the eleven biggest armaments companies with an annual sales of 14 billion Euros and above this part of some technology programs, like the satellite range Galileo:

Initially conceived only for civil use, like smartphones, navigation systems, etc. the European Parliament decided in July 2008, that this technology should be available to the European Security and Defense Policy (ESDP). Thales developed the project ‘Watchkeeper’, too. On commission for the British Forces an unmaned drone (Thales Watchkeeper WK450) was produced. They got ready in 2012 and flew until 2014 some 140 times over Afghanistan and were consistently upgraded in 2016. Since this year it is possible to load the drone with a 2-kg-warhead and laser- and GPS-control. At last the technology from Thales can kill directly.

But with their drone program, they were noticed in the Jungle of Calais, where their products were flying around. (a list in german with companies involved in the eviction you can find here)

Our real reason was to take the word of antique greek philosopher Thales: Ἀνιαρὸν ἀργία. (Idleness is a pain). That’s why we had to a burn down a van of this armament company in Berlin-Weißensee.

So we were happy about the last weeks news about the burning excavator on the Cuvry Brache construction site in Berlin, too. And we want to go along with the words of the comradxs:

“In Hamburg and on the way (to the G20), we want to come into exchange and discussion exactly about these questions and conflicts on a global level. As gentrification does not stop at a border of countries, our resistance must not end in one spot. Rather it should flow in many places and conflicts. That we find a common rhythm and create a staccato of attacks.”

We are everywhere. Connect struggles. Turn the G20-Summit into disaster.

(see also: anarchist call against the G 20 summit in Hamburg)

” …so that it results in confusion in the enemy lines, because more hotspots of conflict break out and not only there where the enemy expected it and is prepared, but in other places, which were unpredictable in the strategic plans of the cops operations.”

No comments yet
Berlin G20 Germany